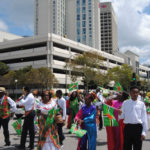 The Knowyourculture dance group, KYC was invited to perform at the 11th Annual Caribbean Festival
“CaribFest” event on Saturday August 20, 2016. The CaribFest celebrations began on Friday August 19th
with a boat cruise, followed by a multi-cultural parade, stage performances and after party.
KYC is a regular feature to CaribFest; ; its unique brand of indigenous music, colorful attire and dancing in
the spectator-lined streets of Norfolk are a crowd thriller.

“Early Saturday morning we proceeded to the designated parking lot of the Norfolk Tides baseball stadium. We took our place as band number 5 which is a privileged location to be in, considering the number of bands and other groups participating in the parade. At that stadium, we could see numerous other groups in their striking colors and with their musical instruments all eager to get on with the parade.

There is no feeling of rivalry with the other groups; after all this is not a competition but a celebration of Caribbean pride and culture. On or about noon, the parade stepped out under clear blue skies and a brilliant sun. Music filled the air, flags waving, KYC dancers strut their stuff, spectators are clapping and waving. 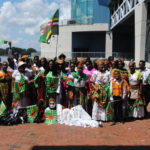 We feed off the euphoria of the crowd, engage them smiling ,waving back and dancing to the sound of our drums. Some of the spectators engage us in conversation wanting to know where we are from and wanting souvenirs. Many give us compliments about our colors and our music. We can see them moving to our rhythm as if they would like to be in our group.

Since we were in such a prized location in the parade, we are able to avoid being drowned out by the louder groups that include steelbands and hi-fi music on large trucks. Those were at our backs and even though we could hear them, their sounds did not interfere with our traditional music.
The parade route took us westwards on scenic Waterside Drive and then slightly northwards to Town Point Park which sits on the banks of the Elizabeth River.

The park houses a concert stage complete with lights
and sound equipment and a large lawn filled with vendors and seating area for people with or without folding chairs. When we arrived at the park, Dominica was recognized by the MC and a member of our group took
the microphone to give a brief description of KYC and what we represented.

As the remainder of the parade flooded the park, we took the opportunity to go back to the hotel for a few minutes and to get ready for the stage performance later in the day. For the stage performance, a group of our young adults danced to tantalizing “jing ping” music and gave the
crowd a superb display of our “heel and toe.”

The event continued with a variety of artists lined up for the event which included Morgan Heritage among
others. As the party wore on into the early evening and night, more patrons entered the park to enjoy the culmination of yet another CaribFest in Norfolk.”

This site uses Akismet to reduce spam. Learn how your comment data is processed.